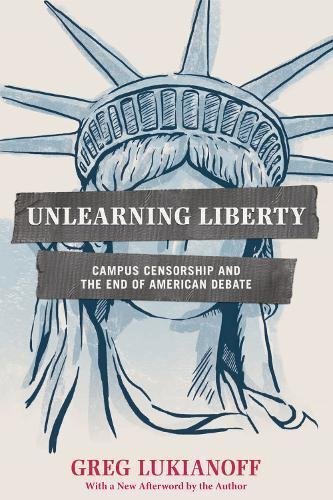 For over a generation, shocking cases of censorship at America's colleges and universities have taught students the wrong lessons about living in a free society. Drawing on a decade of experience battling for freedom of speech on campus, First Amendment lawyer Greg Lukianoff reveals how higher education fails to teach students to become critical thinkers: by stifling open debate, our campuses are supercharging ideological divisions, promoting groupthink, and encouraging an unscholarly certainty about complex issues. Lukianoff walks readers through the life of a modern-day college student, from orientation to the end of freshman year. Through this lens, he describes startling violations of free speech rights: a student in Indiana punished for publicly reading a book, a student in Georgia expelled for a pro-environment collage he posted on Facebook, students at Yale banned from putting an F. Scott Fitzgerald quote on a T shirt, and students across the country corralled into tiny "free speech zones" when they wanted to express their views. But Lukianoff goes further, demonstrating how this culture of censorship is bleeding into the larger society. As he explores public controversies involving Juan Williams, Rush Limbaugh, Bill Maher, Richard Dawkins, Larry Summers--even Dave Barry and Jon Stewart--Lukianoff paints a stark picture of our ability as a nation to discuss important issues rationally. Unlearning Liberty: Campus Censorship and the End of American Debate illuminates how intolerance for dissent and debate on today's campus threatens the freedom of every citizen and makes us all just a little bit dumber.


"Lukianoff is an engaging exposer of the shocking repression of free speech on campus, combining good storytelling with clear principles and a serious purpose with a light touch."  Steven Pinker, Harvard College Professor of Psychology, Harvard University, author of The Blank Slate and The Better Angels of Our Nature

"Unlearning Liberty is a must read book for anyone concerned about the constitutional future of our nation."  Nat Hentoff, journalist, author of Free Speech for MeBut Not for Thee

Destined to be a classic work on freedom in America.”  Donald Alexander Downs, Alexander Meiklejohn Professor of Political Science, Law, and Journalism, University of Wisconsin-Madison, author of Restoring Free Speech and Liberty on Campus

American universities have been described as islands of intolerance in a sea of freedom. Unlearning Liberty is a meticulous and inspiring guide on how to liberate the islands!”  Christina Hoff Sommers, resident scholar, American Enterprise Institute, author of The War Against Boys

Lukianoff argues brilliantly and with wit for the importance of free expression in a society that hopes to produce free human beings rather than craven conformists.”  Daphne Patai, professor, Department of Languages, Literatures, and Cultures, University of Massachusetts Amherst, author of What Price Utopia?


Greg Lukianoff is an attorney and president of the Foundation for Individual Rights in Education. His writings on campus free speech have appeared in the Wall Street Journal, the New York Times, and the Washington Post, in addition to dozens of other publications. A regular columnist for the Huffington Post, he is a frequent guest on nationally syndicated radio programs and has made numerous television appearances, including on the CBS Evening News and Stossel. He received the 2008 Playboy Foundation Freedom of Expression Award and the 2010 Ford Hall Forum’s Louis P. and Evelyn Smith First Amendment Award on behalf of FIRE. Lukianoff is a graduate of American University and Stanford Law School.